Diamante is situated very close to the popular resort town of Cabo San Lucas, but unusual for the area in that the golf is located on the Pacific Ocean side of the Baja Peninsula, as opposed to most other courses that look out toward the Sea of Cortez. Additionally, there are more pristine beach and ocean views here, at least until the development is built out.

The first course, the Dunes Course, was designed by Davis Love III and Paul Cowley and opened in 2009. It achieved worldwide acclaim almost the moment it opened, yet within a few short years had undergone structural change. The original 11th and 12th holes are no more, and the 10th has been altered significantly because of a problematic home site situated too close to the original green. There are also plans afoot to build a new par three between the 9th and 10th holes, as well as to extend the 4th into a neighboring dune and remove the current par three 5th.

Beyond the beautiful views that many courses in Cabo are blessed with, what makes Diamante Dunes different is the use of the pristine white sand hills that run adjacent to the region’s untouched beaches. The sheer size of these apparently mobile dunes is impressive, as are some of the longer back nine holes that skirt around them. The back nine is arguably the best nine anywhere in the greater Cabo area.

Sadly the very elements that made the Dunes Course a success are lacking in the second layout at Diamante, the El Cardonal course designed by Tiger Woods and his associates. El Cardonal opened in 2014 and was the first anywhere in the world to be “designed” by the golfing great. Tiger’s course differs greatly from the Dunes in both style and setting. Built away from the region’s famous coastline, the course not only lacks the water views and absolute sea frontage of the Dunes but also the design sophistication. There are some odd holes here and ill-conceived bunkering concepts. A number of the par fours and fives have traps that are either too large or too frequently deployed. Furthermore, the natural arroyos on the site and some of the better golf undulations are only occasionally used in an interesting or strategic sense. Often this is because bunkers are placed beside them to force golfers to hit even further away. The width, variety and tactical intrigue on display at Bluejack National in Texas are sadly lacking across El Cardonal.

Fortunately for Diamante, while Tiger’s course disappoints on many levels, the Dunes Course more than compensates. Aside from the curiosity of playing something 'designed' by one of the world’s best golfers, you are much better off focusing your efforts on trying to play The Dunes Course. 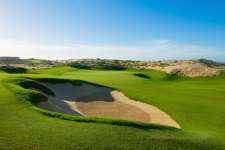