The highest profile golfer on the planet, Tiger Woods turned his hand to design in 2006 with the establishment of Tiger Woods Design, a business that struggled through its early years with a number of unfortunate false starts. A project in the Middle East where Tiger was paid a reported $50 Million was shut down after only six or seven holes were completed, while others in Mexico, China and the Carolinas fell over because of financial issues or environmental hurdles.

Tiger Woods finally completed his first project in 2014, the rather uninspired El Cardonal course at the Diamante development near Cabo del Sol in Mexico. The next was much better, the Bluejack National project outside of Houston in Texas. Bluejack National features many worthwhile elements such as wide playing corridors, a lack of rough and sparse bunkering.

As with most Signature Designers, the fee charged by Tiger Woods Design better represents his status as a celebrity, than the quality of any work produced by his team of design advisors. We understand that Tiger Woods takes golf course architecture seriously and hope that he becomes more hands-on in the years ahead, and interested/involved in high quality projects. While it seems unlikely that Woods will become the next Ben Crenshaw and partner with a world-class architect, there is potential for him to elevate the pure Signature model of design beyond the current standards. 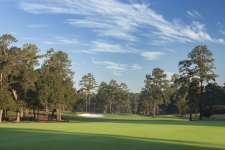