Built in the heart of Portugal’s increasingly popular Silver Coast, an hour north of Lisbon, West Cliffs was designed by American Cynthia Dye-McGarey from the Dye Designs Group and first opened for play in 2017. Dye-McGarey is the niece of legendary architect Pete Dye, and until West Cliffs had mostly made a name building Pete Dye-lite courses on poor pieces of land in Asia. This project was a radical departure for her, as the 200-hectare virgin site at West Cliffs offered the rare combination of unspoilt sand dunes, glorious coastal views and attractive native vegetation. The potential for a true world-class golf course was considerable.

Though undoubtedly the best course in the Dye Designs Group portfolio, West Cliffs is far from perfect thanks to a couple of elements that conspired against the design team. Firstly, the residential component of the development is a touch intrusive on the outward nine. Secondly, the terrain is fairly unforgiving at times and the environmental restrictions placed upon construction forced some of the golf to get closer to houses, and more intimate to water storage bodies, than is ideal. There are also some uncomfortable transitions from greens to tees, and a few steep climbs. On the positive side, the best holes and the best views are among the highlights of a golf trip to this part of the world.

Arranged in separate loops on either side of an attractive modern clubhouse, West Cliffs begins with a couple of conventional, though narrow, par fours and a nasty drop-kick par three before entering the larger and more expansive sand dunes from the strong two-shot 4th. Though set further from the ocean than the back nine, there are some memorable features on the front side including the 5th, a partly obscured Redan-style par three which features a Ballyneal or Old Macdonald-style green with a series of strong rolls. Though fun for the accomplished player, like a few of the other greens there is a little too much movement for the area this target occupies. Generally speaking, the green sites here aren’t poorly conceived but at times they move so aggressively in a small area as to be very difficult on the average approaching golfer.

Another example of a slightly overcooked green comes at the drivable par four 8th, which is a tremendous hole regardless and perhaps the best of its type in Portugal for the views from the elevated tee and an angled fairway that dares you to attack and take risks.

Sea views on the similarly enjoyable short par four 10th and attractive scruffy bunkering on the 11th are the best areas of a back nine that unfortunately gets a little extreme toward the close. Neither the semi-blind back tees on the par three 16th nor the steep uphill nature of the blind tee shot on the 17th or the lakeside approach into the final green works quite as well on the ground as they perhaps appeared in planning.

Regardless of any frustration with the close, this is a dramatic place to play and a beautiful stop along arguably the best golf coastline in southern Europe. The combination of lovely ocean views with rugged, naturalistic bunkering cut into the raw sand hills make this an exciting test of your game, while the occasional blind shot and forced carry do give West Cliffs somewhat of a links-like flavour. A few too many fairways pinch 250 metres from the tee, but otherwise there is plenty of variety across the layout and enough directional shifts to ensure that the blustery wind is a constant factor. We recommend a round at West Cliffs for those visiting the area to play Praia D’El Rey or Oitavos Dunes further south. 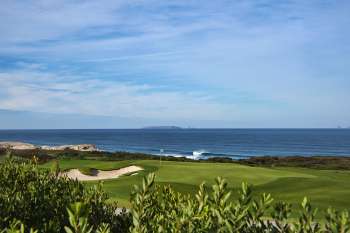 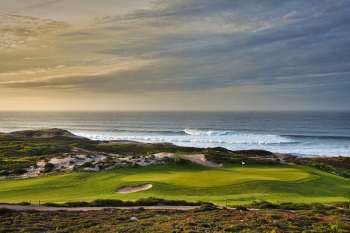 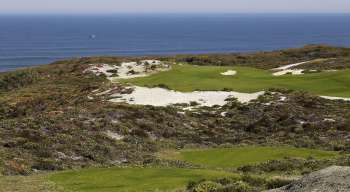