The 36-hole Sentosa Golf Club occupies much of the eastern side of the small island of Sentosa, a few hundred metres from the southern coast of the main island of Singapore. The club is owned and managed by the same organization that developed the Resorts World Sentosa, a popular tourism and attraction complex complete with 14 hotels and the Universal Studios theme park. The golf club was established in the 1970s, and today has both the best golf and the most sought-after private club membership in Singapore.

Although the Serapong and Tanjong courses share some design similarities, they are set on opposite sides of the island and differ greatly in terms of outlooks and landforms. The Serapong has long been the higher ranked, owing to its tournament pedigree, northern aspect and direct coastal interaction. Several holes play toward and along the South China Sea, with others carved around three large primary lakes.

By contrast, the Tanjong is wedged into the south-western corner of the island but separated from the water by an upmarket housing precinct built recently on reclaimed land. The front nine rises twice to the top of a small hill and enjoys attractive views across the property and out to sea, but otherwise most of the holes occupy the club’s somewhat flat interior.

The Serapong Course at Sentosa Golf Club opened in 1982 and was initially routed by American designer Ronald Fream. Around 2007 the course underwent a major maintenance upgrade, and several areas were redesigned by Gene Bates and his associate Andrew Johnston. The result has been superior turf conditions on a more regular basis, and the easing of some of the more cramped and side-hill sections of the property.

Although there is quality away from the Sea, unquestionably the highlight at Serapong are holes like the 5th, 6th and 7th which play toward and then directly along the edge of the Sentosa coastline. Neither the 6th nor 7th quite reward golfers hitting nearer the Sea as well as they could, but both are attractive, memorable holes. As are the 14th and 15th which also play along the coastline in the opposite direction. The closing hole around a manufactured lake is a little contrived, while the earlier par fives either dogleg too sharply or were designed with severe split fairway areas that only manage to tempt the elite golfer.

Fortunately the shorter holes are much better, and the par fours feature a reasonable variety of angles, green sites and approach options. While none of the holes would be regarded as world-class, visitors to Singapore will struggle to find a more attractive and enjoyable layout than the Serapong. When presented in perfect condition, and played with a fresh sea breeze, it’s an effective test of golf. 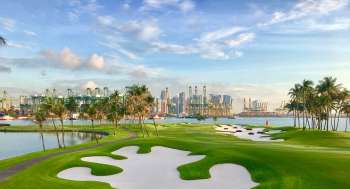 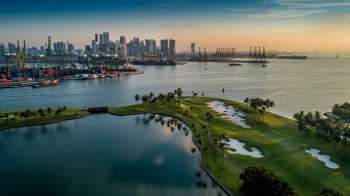 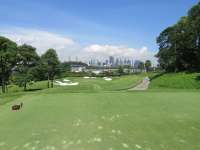 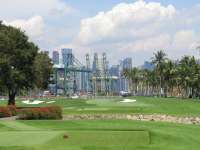 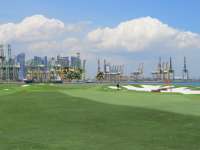 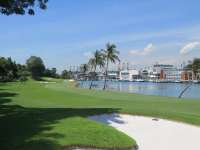 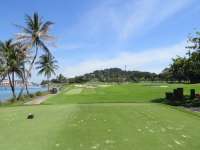