One of the most naturally appealing golf facilities in Sweden, Bro Hof Slott was the brainchild of businessman Björn Örås, who purchased the aging Brogård estate in 2002 with a view to transforming it into a tournament ready golfing mecca. Situated half an hour northwest of Stockholm, the estate features a Herman Holmgren-designed Baroque style Castle from the 19th century, which was renovated by Örås to use as his clubhouse. There are few more impressive structures in golf, and fewer still inland courses in Europe on sites quite as beautiful as this.

All told the Bro Hof estate measures around 500 acres, much of it set alongside the still waters of Lake Målaren. The more famous of the two courses is the brutish Stadium Course, set partly along the waters edge. The best, however, is the understated and classically charming Castle Course, routed inland of the lake and occupying the more undulating territory. Both were designed by Robert Trent Jones Jr. and his company President Bruce Charlton.

Where the Stadium Course is unashamedly designed to test elite golfers, and can be stretched to an insane 8,000 yards, the Castle focuses instead on playability and providing a host of fun, strategic options for golfers of all abilities. It's also less obviously artificial, given the use of golden fescue roughs and a darker, native sand in the waste-style bunkers. By contrast, the Stadium Course bunker sand is blindingly white and the traps much more formal, and modern in shape. The greens are also more difficult on Stadium, and less interesting to approach given the black or white nature of the putting contours. Unlike the Castle, here the slight miss is accentuated to ensure a tricky two-putt remains. The fact that members have such different courses to enjoy at Bro Hof, is one of the clubs strongest selling points.

Like Cabot Cliffs in Canada but unique for this part of the world, the Castle Course routing includes six par threes, six par fours and six par fives. There are some awkward transitions between holes, but generally the layout flows nicely and it certainly doesn't feel gimmicky to have arranged par in such a way. The fact that a number of greens are either devoid of bunkers or protected by a single trap suggest the emphasis is far less on difficulty than next door, and that the bunkering is used to influence strategy off the tee. Simply finding short grass is not enough if you hope to score well, as greens are clearly arranged to be approached from a certain side of the fairway.

Beyond the attractive wasteland bunkering and softly contoured green sites, among the highlights of the Castle Course is the use of remnant rock outcroppings and interesting strategic ideas like the split fairway on the par five opening hole. The entire front nine is full of quality, and about as consistently appealing as any nine we can remember from the Robert Trent Jones II company. Each of its short holes are excellent, as are bending cross-waste par fours at the 6th and 8th. Unfortunately the course deteriorates a little from the middle of the back nine, but let that not dissuade you from one of Europe's really enjoyable golfing tests. We understand the appeal of playing where the professionals play, but if making a quick 18-hole visit to Bro Hof Slott, then the Castle Course really ought be the one that you try to play. 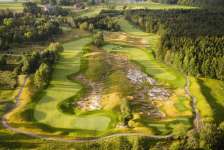