The second course at Dubai's Emirates Golf Club is now known as the Faldo Course, having opened in 1996 as the Wadi Course.

Nick Faldo and his team redesigned the course in 2006, because of shortcomings with both the routing and design of the original layout. The Faldo improvements certainly helped elevate this layout, but the golf at the Emirates Golf Club remains somewhat underwhelming for seasoned travelers, who are unlikely to be overly impressed by the design work here.

The standout feature of the Faldo Course is its proximity to the Dubai skyline, several holes playing to greens backdropped by skyscrapers or tall residential buildings. The course gets so close to the city that the par five 13th hole had to be cut to play as a short par four, because technological advancements in the game had made adjoining Villas almost the ideal driving line. The heavily bunkered hole doesn't work at all as a par four, as your choices are to either deliberately drive into the greenside bunkers or avoid them by playing 7-iron/wedge short of a hazard across the fairway, or a 4-iron/pitch over it.

Elsewhere, the designers used lots of large sandy wastes to prevent long shots on certain holes, the hazards eating into the fairway further than is ideal and more than most will be comfortable with. The mid-length 4th, for example, runs along a lake and is so horrendously narrow because of bunkers that although precise golfers may be able to layup and leave a wedge approach, the majority of golfers will face a sandy second shot. There are odd pinch-point design areas elsewhere as well, including on the 9th and 18th holes which narrow off the tee via a Peninsula fairway on the 9th and fingers of sand on the 18th that jut into the fairway and force your tee shot left.

On the positive side, city views on the 2nd, 6th and 8th standout along with holes like the par four 14th and long par three 17th. Despite issues, the Faldo Course at Emirates Golf Club is a less strenuous test than the Majlis Course and likely a popular alternate option for many visiting the area. 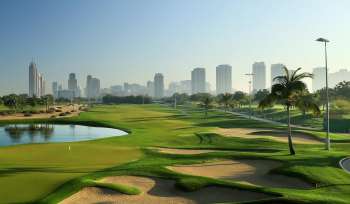 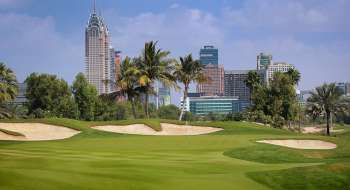