‘From the moment I stepped out on these wild, wind-shaped sand dunes, I knew this would be the opportunity of a lifetime.’ David McLay Kidd

A modern phenomenon, the Bandon Dunes Golf Resort was founded by avid links-lover Mike Keiser, on a remote stretch of dunes near the small southern Oregon town of Bandon. Keiser first saw this 1,215-acre property in 1994 and despite being hundreds of miles from a major city thought it ideal for his dream to bring links golf back to America. Seeing the potential for a sprawling multicourse golf resort, he negotiated its purchase for $2.4 million, about half the asking price.

Although the tall sandhills had a healthy smattering of scotch broom, scrub pine, fern, cedar and spruce it was the dense gorse that proved the major attraction for Keiser. Not only did the weed remind him of Ireland but it had grown out of control since its introduction to the region and twice caught fire and burned down much of the town. The prospect of a developer removing most of the gorse and then controlling what remained helped him win planning approval to construct the resort.

Remarkably, Keiser employed inexperienced Scottish architect David McLay Kidd to design his first course, partly so he could retain control of the project and be actively involved in the decision-making process. Conscious of the potential for additional development, he kept some of the coastline for future courses but was still able to offer Kidd more than a thousand yards of prime seaside land. He was also given great natural vegetation and undulation, as well as the freedom to plant fescue grasses and keep his course playing firm and fast. This allowed for the building of wide, rolling fairways, often with strategic approach shot angles, and large greens that are contoured to present golfers with a variety of short game challenges.

While the majority of Kidd’s holes are arranged within the region’s windswept dunes, each nine touches the cliffs with three full holes and another three greens pressed back against the shoreline. Though there are some fine holes away from the water, such as the mid-length 14th and teasing par four 10th, the primary thrills here are reserved for the coastal areas.

The first hole to introduce players to the Pacific is the 4th, which bends through soft duneland toward an open green site and an incredible ocean backdrop. Cleverly, the putting surface is receptive to a chasing approach, but angled toward a pair of deep guarding bunkers. The 5th then tiptoes right along the edge of the American West Coast and narrows as it approaches a target tucked beneath a gorse-covered ridge. The 6th, like the 12th and 15th, is a beautiful par three with an exposed green site and uninterrupted sea views. The final coastal hole is the most photogenic and also the most puzzling. Crossing a nasty ravine and comprised of staggered landing areas divided by a sandy bank, the mid-length 16th is right on the edge of the cliffs and a glorious hole regardless of whether the best play, and the appropriate aiming points, are apparent or not.

Bandon Dunes opened for play in 1999 and seemed to immediately reawaken Americans to the glories of seaside golf. The resort has since grown and, in many ways, improved, but it was Kidd’s course that first put it on the golfing map and the track remains as popular with visitors as any of its neighbors. 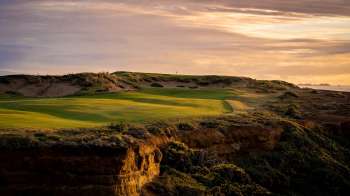 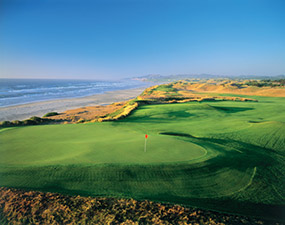 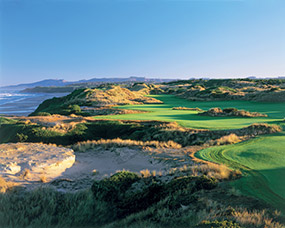