Home to a number of Hollywood A-listers, the Bel-Air Country Club was founded by a wealthy oil tycoon and designed by architect George Thomas, who along with his partner William Bell, built the course across the hills and valleys of West Los Angeles. The pair began by shaping what is now the front nine, which opened for play in 1927. The back nine was added a few years later, once they had figured out how to overcome a particularly large canyon that split the property in two. Placing the clubhouse on a crest overlooking the hazard, they decided to build the 10th tee immediately beside the canyon and locate a green 200 yards away on the other side, connecting the back nine to the front via a large suspension bridge.

In its infancy Bel-Air was regarded in the same league as Thomas’s celebrated creations at Riviera and LA Country Club, but unfortunately the members have continually altered their layout over the ensuing years. Aside from removing several key design elements they have rounded out most of Thomas’s innovative bunker shapes and allowed trees to narrow the playing corridors. Thankfully the original routing remains largely intact, and it is full of great variety and manages to tie the awkward landforms together in a cohesive and strategic manner. Traversing a series of valleys and linked by concrete tunnels carved through the hills, the front nine is best recommended for beautiful green complexes at the 3rd, 5th, 7th, 8th and 9th while back nine gems include the par three 13th, with its magnificent frontal bunker, the three-shot 14th and the downhill 17th, which turns right and tiptoes precariously along a narrowing ridge. There is nothing on this course, however, to quite match the 10th, and the pleasure one gets from marching across the club’s iconic bridge knowing your ball rests safely on the distant green.

Despite substantial changes, Bel-Air retains the attributes of greatness and thanks to its routing and preserved architectural features is still a fabulous golfing experience. There is no doubt, however, that the restoration of more Thomas design would make the course even better, and elevate it back alongside his other LA masterpieces. 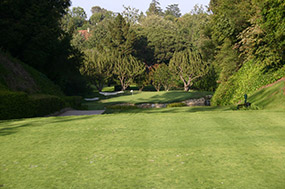 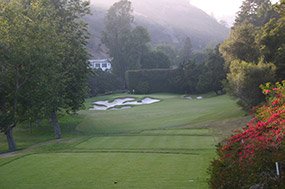 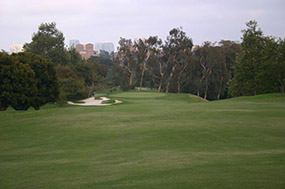