One of America’s more dramatic modern courses, the private Boston Golf Club is situated south of Boston and built upon an abandoned rock quarry near the small township of Hingham, Massachusetts. Opening in 2005, the course was designed by architect Gil Hanse, who skilfully incorporated abrupt elevation changes, dense woodland and sheer rocky ledges into an attractive, traditional-style layout.

The overwhelming highlight of Hanse’s work here is the believability of his shaping. The sand and gravel base made it easier for the design team to create contours that match the existing natural terrain but the work done was first-class. Fairways crash and rise with great irregularity, the holes enhanced by beautifully constructed bunkers that are often fringed by bracken or shaggy tufts of native grass. The varied and heavily contoured greens are another standout feature; the targets are generally open at the front, yet consistently more difficult to approach the safer you drive from the tee.

Arranged in two nines on either side of an arterial road, the course begins with a gruelling opening stretch that includes a tough three-shotter and a couple of crafty par fours. The 3rd is especially tricky, as its ideal landing area is partly obscured and its shallow half-pipe green is angled across the fairway and placed immediately beyond a nasty gully. The next glamour holes are the 5th and 6th, the latter a superbly bunkered par three set within a shallow clearing, and the 5th a remarkable short par four housing one of the narrowest greens in the world. Protected by a gnarly waste bunker, the putting surface here is only a few paces wide and perched atop a vertical spur that falls sharply on all sides. Unless driving right up close to the sand, it is only accessible with a precisely judged bump along the ground.

From the tightest green imaginable to one of the most expansive, the par four 12th impresses for a broad target straddled atop a gentle ridge, which falls steeply both front and back. The par fives later in the round are also special, particularly the 15th, which rises and falls and is cleverly bunkered to make players flirt with sand along its left side or face a blind third shot across a pronounced fairway hump. Unusually, the round ends with a par three finishing hole, its attractive green resting on a ledge beneath a forested ridge.

About the only areas that fail to excite are the long par threes over hazards and the small, awkward green site at the par four 13th. The nostril-like bunkers on the charming short 16th are also curious, as subsequent traps appear to discourage the aggressive play from the tee. The biggest single issue, however, is the long distance between nines and the fact that even walkers need to drive between the 9th and 10th holes.

Some will also be concerned with the manner in which Hanse has kept his foot on the gas from the opening hole through to the finishing green. You don’t really get a breather anywhere on this layout, as disaster waits around every corner. If struggling with your game, therefore, this is not really a course that you can ever get comfortable playing. That said, the membership here is mostly made up of accomplished golfers and the best parts of Boston Golf are world-class. 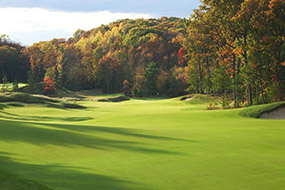