‘We knew from our first day on site that we wanted to create a course that would be capable of hosting a U.S. Open.’ Robert Trent Jones Jr

A controversial municipal development southwest of Seattle, Chambers Bay opened in 2007 and was built within an abandoned gravel mine alongside the waters of Washington’s lower Puget Sound. The course was developed by Pierce County, which employed Robert Trent Jones Jr. as its designer and invested around $20 million in the hope of creating a track to rival the best public courses in the country. Its selection as a US Open venue less than a year after opening appeared to justify such expenditure and validate the design style employed by Jones and his associates.

Bordered on one side by the sparkling Puget shoreline and the other by a steep hillside, the site appears a natural setting for golf, yet mining had stripped the virgin land of its natural ground contours and enormous amounts of earthmoving was required to make it playable. Fuelled by the success of Oregon’s Bandon Dunes Resort, the Jones team was determined to build a links-style course and cut away a large part of the hillside to enable themselves to create sizable dune structures and realistic golf corridors. Most of the layout is arranged beneath this hill, with holes sloping toward the water and boasting stunning outlooks across the inlet and farther west over to the snow-capped Olympic Mountains.

The design itself is sensibly spacious, with lots of elevation change but only a handful of areas that seem overdone. Helping to make it feel an authentic links are the free flowing teeing grounds, eroded sandy waste areas and greens that are open and widely ranging in shape and size. Pleasingly, the contouring of the putting surfaces is less extravagant than some others by this design team and generally ties in well with the surroundings.

Despite only two holes running directly along the shore, a number of others overlook the water or are routed in close proximity. The round opens with a fairly daunting par four played toward the bay, and a narrow green flanked by an impressive dune ridge. The 2nd then runs adjacent to the shoreline and starts within the dunes before opening up and turning slightly toward the Sound and one of its secluded islands. This approach, as with the par three 3rd, is dominated by the outlook and played across a vast sandy waste toward a green sloping gently to the left. The other par threes are similarly memorable. The 15th falls sharply toward the sea and a beautifully bunkered green framed by the only tree on the property. The 17th also drops significantly, this time along a steep dune to a green engulfed by sand. Squeezed between is a par four the plays along both the water and a railway line. The hole is notorious for a shallow finger of green that extends along the back right portion of the target and is all but impossible to hit for those playing too safely away from the coast.

The rest of the course is an equally exciting mix of scenery and substance, with a number of really distinctive target areas and firm and bouncy fescue playing surfaces throughout. Although there are a couple of holes that don’t quite work, few courses are perfect and, importantly, this one is good enough to more than warrant the attention it has received. Chambers Bay may not have been the best US Open venue, but it’s a unique development and likely to not only attract visitors from across the country, but most importantly to inspire locals into our beautiful game for generations to come. 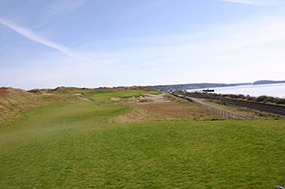 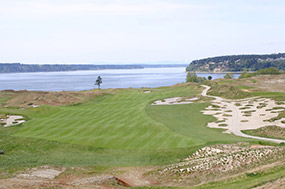 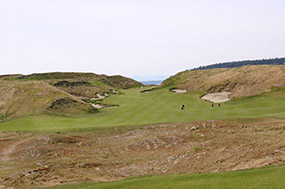 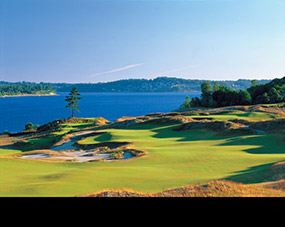