Opening for play in 2010, the Chicago Highlands golf course was designed by architect Arthur Hills on a 270-acre former landfill site with impressive views across the Chicago skyline.

Given the virgin terrain here when Hills and his team started work on the project, there naturally needed to be a lot of earth shifted across the property in order to build the holes. While much of the site has been transformed effectively into a quasi-linkscape, complete with whispy fescues and rolling undulations, there are numerous areas that do seem overdone, particularly the mounding around the greens and on some of the shorter holes. On the positive side, many of the crumpled fairways and expansive green complexes do boast genuine links-like characteristics and there are a number of fun holes to play. Arguably the most notorious is the 9th, a Mount Zion-esque short par four that rises up to a green perched dangerously on the top of a domed hill. Missing the green here, on any side, means walking back down the hill to try pitch up again. The almost completely hidden par three 13th, surrounded by mounding, is another talking point.

While Chicago Highlands will have its detractors, given the starting point and the fact that this is a pure golf-only development, it’s also likely to win many admirers over the years. The amount of earth shifted was quite remarkable to build this layout, and the fact Hills managed to squeeze a few unique and interesting holes into his routing is a credit to him. 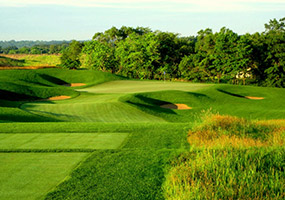 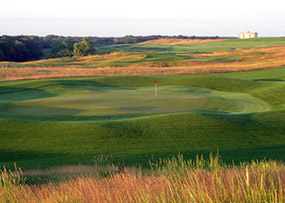 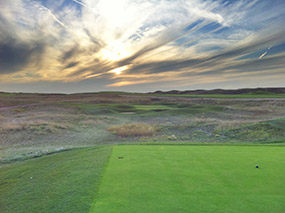