Despite its small-town setting, the 2006 opening of Wisconsin’s Erin Hills golf course was one of the most eagerly anticipated of the 2000s. This was not due to the event being carried out with any great fanfare, but rather because the unopened layout had already been awarded a National Women’s Amateur event and was being touted by the USGA as a future US Open venue. Indeed, a few years after opening the course was awarded the 2017 Championship, the first to be held in the state.

Covered in fescue grasses and surrounded by rolling meadows, Erin Hills occupies a vast 650-acre site blessed with a series of dunelike hills and ridges that had apparently been created by glacial deposits made during the last Ice Age. The course was designed by Dr. Michael Hurdzan and Dana Fry with assistance from architectural commentator Ron Whitten. Given the nature of the terrain and the plateaus, hollows and internal undulations that existed on the property, the design team tried hard to find as many natural settings for their greens, tees and fairways as possible. A number of tees are located atop ridges, with greens often built in saddles, up on plateaus or cut into the hillsides. Earthworks were only required on a handful of holes, with the majority of the playing corridors simply discovered and grassed for play.

Despite its obvious appeal, Erin Hills is quite a controversial course, with several areas of concern. Firstly there is the routing, which forces front tee players to walk substantial distances between greens and tees. The layout is also very long and difficult, which is great for championship play but at times it does get a touch severe for the average public course golfer. On the positive side, approach shots into the large, sloping 3rd green and the elevated 7th are both exceptional, as is the punchbowl target and bunkering on the shorter par four 4th. The 8th is also good, the nasty left-turning two-shotter rising sharply as it nears a dangerously pitched putting complex.

Next is the beautifully bunkered par three 9th, which was initially built as a “Bye” hole but is now part of the course proper and arguably the best short hole on the property. This fine, falling par three links the outward half to a back nine that begins with a strong par four that had originally played as a controversial par five. Further moments of note on this side include an obscured approach into a basin green on the 12th and the attractive one-shot 13th with its putting surface leaning toward a deep greenside bunker. The short par four 15th is another hole with a fine green site, its elevated target cut into the side of a hill and demanding pitch-shot precision from those back in the fairway.

While there is no doubt that the majority of readers will enjoy tackling Erin Hills, some will feel there are a few too many forced carries for such a linksy layout. It’s true that some of the longer uphill shots are brutal on the weaker hitter, but this is a gripping challenge and not only are the best holes outstanding, they are manageable for a wide range of skill levels. The have also improved noticeably since first opening, and are likely to further mature as the lingering effects of preparing for, and then hosting, the US Open are felt. 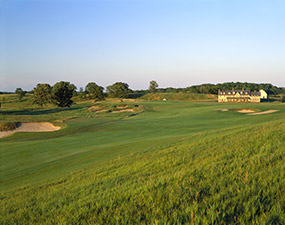 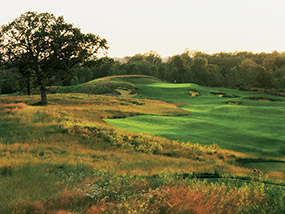