Courtesy of the golf club

On a former dairy farm in the fertile Black Prairie region of eastern Mississippi, the Mossy Oak golf course was constructed and developed as a par-for-play facility by the same family who back in the 1980s had founded the private Old Waverly Golf Club across the road. At Old Waveley George Bryan had engaged Bob Cupp and US Open champion Jerry Pate as his designers, and in 2016 it was Gil Hanse and his Cavemen Construction team. The two courses are operated as sister facilities, although Mossy Oak is public access and, despite its youth, very much the old-school sibling.

As much as for a handful of individual highlight holes, the Hanse design at Mossy Oak is recommended for its understated, lay-of-the-land nature and strategic use of natural landforms and features. The routing is well considered and pressed hard against the perimeter of the square property, to enable internal holes the space they needed for strategic golf and to ensure a central ridge could be fully integrated into the layout. There are some powerful bunker arrangements and sizable elevation changes within the course, but subtle elements more frequently impact on play. Examples include angled bunkering on the sidehill 6th and 14th holes, and the use of a foreshortening trap on the par five 7th, to cleverly disguise a subtle hollow in front of its green site. The seemingly innocuous but dangerous 10th is another example. Avoiding sand down the right side of this driveable par four brings a St Andrews–style bump short of the green more into play.

Among other noteworthy holes are the cross-valley par three 4th and the 250-yard 11th, played over an irrigation dam. The par three 15th and long 17th on the other side of the water, are also memorable, particularly the blind Sleepy Hollow-type approach into the top of a hill at the 17th. Aside from a somewhat tepid closing hole, the back nine has a nice rhythm and is consistently engaging and, like the front, beautifully shaped and easily walkable, provided you aren’t playing in the heat of summer. Hanse and Wagner deserve a great deal of credit here, for helping George Bryan establish an impressive 36-hole golf destination in the most unlikely of locations. 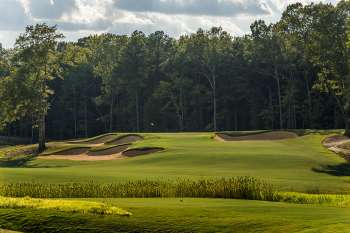