The following course review of the Ohoopee Match Club appears in the new edition of Planet Golf USA (2020).

Situated on the outskirts of a tiny town in rural Georgia, about an hour west of Savannah, the Ohoopee Match Club was opened in 2018 and founded by tech investor and entrepreneur Michael Walrath. Walrath clearly values innovation, and with his club wanted to both respect the traditions of our game whilst also moving private golf in a completely new and exciting direction. With the exception perhaps of venerable old British clubs like Prestwick or the Honourable Company of Edinburgh Golfers at Muirfield, Ohoopee is unlike any other pure golf facility we have seen.

Scorecard and pencil golfers may struggle with the experience here, because Ohoopee Match Club was unapologetically setup for match play golf. The course was designed by Gil Hanse and his partner Jim Wagner, and features 22 holes set across a vast disused hunting plantation near the Ohoopee River. Hanse and Wagner had previously been engaged to work on a combined golf and motor sport venture on the site, which ultimately fell over when the Global Financial Crisis hit. They knew the land had the space, the seclusion and, crucially, the sand necessary to create the sort of high-quality, privileged establishment that their client desired. Walrath agreed, purchasing the 3,500-acre property in 2016 and engaging Hanse to build him a unique match course that he could share with a group of his golfing associates, as well their friends and guests.

Aside from a pure sandy base, heath-like ground cover and mature collection of oak trees and loblolly pines, Hanse and Wagner were also blessed with spacious golf corridors, subtle elevation changes and some dramatic natural features such as dunes and a large lake. Most importantly, they were armed with a directive from Walrath to essentially throw standardization out the window and focus instead on creating holes that were fun, sporty and likely to prove pivotal when played in a head-to-head situation.

The result is an unconventional design full of half–par holes and countless risk versus reward situations. The golf is charming first and challenging second, with holes that can be generally tackled as aggressively or as conservatively as the golfer chooses. Starting beneath an elevated clubhouse and beside the property’s main lake, the routing changes direction regularly as it takes golfers on an absorbing journey through a generally sparse, scrubby woodland. The course does emerge briefly into an open meadow at the 10th, before returning into the trees from the 13th hole. Interestingly, this open section houses four additional holes, which can replace the 2nd through 5th and form part of a shorter, alternate loop known as the Whiskey Routing.

As one might expect of such a concept course, the best elements at Ohoopee tend to be the elastic “do I or don’t I” type holes, and the individual areas where golfers are afforded both the promise of a birdie, as well as the very real risk of a double bogey disaster. Conceptually the longer holes are an obvious highlight, including the lovely 2nd, which bends around the main lake and is actually listed as a par 4.5. The longer 3rd is then nominally a par 5.5. Both reward those who challenge gaping bunkers that guard the narrowing layup position with a far more straightforward pitch into the green. The “Hell’s Full-Acre” style hazard on the rising par five 11th is another terrific feature. Likewise the mid-iron par threes at the 5th and 16th, each played across complex wastelands into almost–island greens set beyond the sand.

While the longest and shortest holes are impressive, it’s arguably those that straddle the long three–short four divide that provide the most memorable match play moments. Each of the 8th and 13th, for example, plays in excess of 250 yards from the tips, and are ideal gambling par threes that tempt golfers to disregard the simple four in order to risk a three or better. The 14th and 9th are listed on the scorecard as par 3.5s, and can also be particularly cruel on those who ignore the conservative play and instead attack the green off the tee. Interestingly, the 14th bears more than a passing resemblance to Hanse’s infamous 5th hole at Boston Golf Club, its push-up green designed with a similarly anorexic waistline and with deep trouble lurking on the right and tricky chipping lows on the left. Common across the course, this target gets tougher to hit the safer one plays from the tee, making it an ideal playoff–type hole.

Although Ohoopee has a small membership and focuses more on matches for its members and guests than red carpet for the raters and rankers, it has managed to establish a devoted following among the cognoscenti, many of whom regard it as the most significant course in the Hanse/Wagner portfolio. It’s certainly their most original creation, and the perfect vehicle to foster, or further strengthen, genuine bonds of golfing mateship and camaraderie. The whole facility is world-class and even those who prefer stroke play to match should jump at the chance to play Ohoopee, should the opportunity arise. 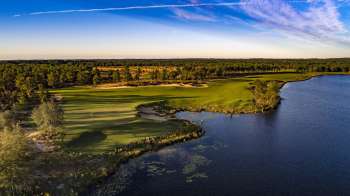