Photo courtesy of the Resort

Renowned as the Cradle of American Golf, the Pinehurst Resort has been luring visitors to North Carolina for more than a century. Its primary attraction has always been Donald Ross’s legendary No. 2 Course, which has changed appearance but been largely preserved throughout the years. The same cannot be said for its nearest neighbor, the No. 4 Course. Given their shared landscape and common design origins, the stories of No. 2 and No. 4 at Pinehurst seem inexorably intertwined, even though for decades they have barely seemed related.

Pinehurst No. 4 was born in 1919, and initially designed by Ross who once thought so highly of its potential that he described it as likely to become the resorts “star”. That was before he missed out on the design of Augusta National, and decided instead to refocus all of his efforts on ensuring No. 2 was the finest layout in the South. It was an obsession that lasted until his death in 1948, and arguably preoccupied the resort for many years thereafter.

As with other courses at Pinehurst, until a 2018 makeover by Gil Hanse and Jim Wagner, No. 4 was viewed as little more than a backup option for those hoping to play No. 2. For fifty years its appeal waxed and its appeal waned, as first Robert Trent Jones Sr., then his son Rees Jones and finally Tom Fazio redesigned it. With each change the work of Donald Ross was erased, and a naturally sandy environment essentially converted into an artificial all-turf parkland.

Unlike the successful transformation of No. 2 in 2010, Hanse and Wagner’s work on No. 4 was less restoration and more about reimagining how their large, rolling landscape might have looked back in Ross’s day, and then redesigning holes to fit the property as well as the spirit of this era. Gone is the clean, modern aesthetic of previous iterations and in its place a rugged old-school golf course has emerged, with naturalistic bunkering, lay-of-the-land greens and scruffy transitions from formal turf areas into sandy wastelands.

Beyond exposing sand and accentuating the scale and majesty of their property, Hanse and Wagner deserve credit for the restraint and sensitivity displayed through design. Careful not to copy No. 2 they instead paid tribute to Ross by building holes and features that were more in character with his work at Pinehurst than any of the previous redesigns. A great example is the 18th green site, its side swales less severe than No. 2 but similarly cut down into the ground to complicate the approach and add intrigue to the recovery game.

Other highlights include the tough, sandy 5th, plateau par three 6th and the bold use of bunkers and native wastes on the adjacent 7th, 8th and 9th holes. The left-bending 12th is also excellent. Foreshortening bunkers and obvious trouble beyond a dangerous green make the successful approach here as rewarding as any shot on the course. The final talking point is the 320-yard 16th, perhaps the most daring short four that Hanse and Wagner have designed on a public access course. Ample room off the tee tempts many to pull driver here, but humps and a small, push-up green lead to more bogeys than birdies.

Invariably this course will be compared to No. 2, and perhaps also to some of the other work done recently by this design team. On both fronts it stacks up well, particularly as a secondary star for Pinehurst and an attractive, playable complement to the stiff challenge presented by Donald Ross’s neighboring masterpiece. 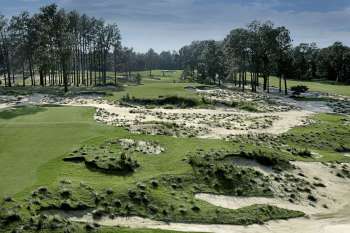