Founded by members of the Los Angeles Athletic Club, the Riviera Country Club was designed by Golden Age icon George Thomas and built within a deep canyon north of Santa Monica. Thomas was initially unimpressed by the land offered him to design Riviera, and apparently only committed to the job after assurances he would be given the freedom to create whatever he pleased. He was also given a liberal budget, which he spent clearing the property and aggressively shaping the land to fit his design philosophies. When Thomas struck the inaugural drive in 1927, his course had cost more to build than any other in America.

What members at Riviera received for their money was a groundbreaking layout described by consulting architect Dr Alister MacKenzie, as ‘nearly perfect’. MacKenzie was particularly impressed by Thomas’s creativity. Modern golfers marvel at icons like the 4th, 6th and 10th, yet when the course opened almost all of the holes here were unique. As was the bunkering style and the use of strategic green complexes, which were continually arranged so that hitting poor drives was followed by tougher approach shots.

Starting from high atop the northern rim, the round begins with a plunging par five down into the canyon and ends with a rising two-shotter back into the base of this same hillside. In between the golf course occupies a relatively flat basin, and the designer deserves enormous credit for being able to craft engrossing holes out of such subtle landforms. His most admired hole is the magnificently bunkered 10th, one of the world’s great short par fours. There are countless ways to attack this brilliant teaser, yet even in this modern era players struggle to find a trouble-free path to a green that is only a few yards wide and angled to make driving somewhere up the tighter left side imperative. Another gem is the 4th, a super tough Redan-esque par three famous for its away-sloping green and a mammoth sand trap that fronts the target and forces most to bounce their balls in from the side. The other major talking point is the par three 6th, which has a bunker in the middle of its green but works because the tee shot is exciting and the contouring of the putting surface has made it possible to putt around the trap.

Further highlights include the 70-foot drop from the opening tee, the wicked little par three 16th, almost entirely encircled by sand, and the mid-length 7th, a beautiful driving hole played obliquely along a ditch. Slowly rising and wonderfully bunkered, the 9th is another fine par four, as is the uphill 18th, which is initially blind over a steep ridge and then played into a bowl green set within a natural amphitheatre.

Although the odd tee has been stretched to combat the effects of increased driving distances on the playing strategy of the holes, thankfully the structure of Thomas’s work here has been largely preserved. The club did tidy up a once-fearsome barranca that runs through the property and have noticeably improved the general conditioning of the course, but stepping foot on Riviera still elicits a genuine sense of nostalgia. Regardless of your preferences or golfing perspectives, Riviera is a true American treasure and the course remains one of the most interesting and challenging from this important era. 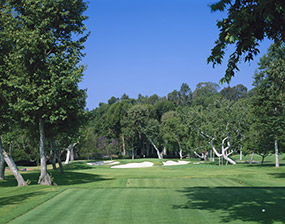 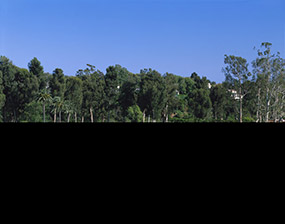