The high-end private club market in America is awash with upstarts and newcomers, and more competitive than anywhere else in the world. No other market could support hundreds of exclusive, small membership clubs, and the high-fee/low-member model that is popular here. While the majority of the famous clubs date back many decades, the modern era has continued to produce expensive, private golf and seen its share of both spectacular failures as well as great successes. The likes of Friar’s Head and Sand Hills are examples where modern clubs have the golf, the ambience and the amenity just right for their particular market and their particular membership. Another, less well-known, success story is the Shelter Harbor Golf Club, in Rhode Island.

Shelter Harbor is situated within an elevated woodland near the small town of Charlestown, around two miles from the New England shoreline. The development site covers 400 acres and is completely free of any associated housing. Unlike other private club developers, who feel they need an edge or to perhaps create a point of difference with their competitors, here the focus from day one was simply on producing great golf and a warm, friendly amenity.

Designed by the prolific architectural duo of Dana Fry and Dr. Michael Hurdzan, Shelter Harbor opened in 2004 and is recommended as much for its peaceful setting as its elegantly uncluttered and strategic design. The course is laid out in spacious nine-hole loops on either side of the stylish Victorian shingled clubhouse and incorporates numerous natural features, including wetlands, mature hardwoods, old stone walls and glacial rocks and large boulders. There are also some significant elevation changes across the property.

The construction of the course involved plenty of earthmoving, and working with the limitations of a rocky under-crust. Given the landscape and its inland setting, a key design decision for Hurdzan and Fry was the feel of the layout and general vibe of the design. They had to make their holes both attractive to look at as well as interesting and fun to play. Bunkering was obviously a key, and ensuring that holes had a timeless, natural appeal. Interestingly, they opted to use Coore & Crenshaw bunker collaborator Jeff Bradley on the project, and to build rugged sand shapes fringed with tufts of fescue. A real feature of the golf course, Bradley did a superb job making the hazards appear aged and part of the virgin landscape.

More than just great bunkers, Shelter Harbor has a bunch of really strong golf holes and a terrific set of green complexes. Some, like the roller-coaster 4th, might seem a little busy but most are beautifully set within their natural surrounds and great fun to chip and putt around. Better holes include excellent long par fours at the 3rd and 14th, a gorgeous valley par three at the 11th, the clever short par four 7th and a spectacularly bunkered, snaking par five 9th hole. Across the layout the fairways are generously proportioned and strategically arranged to mostly favor those who successfully take the aggressive driving line.

Hurdzan and Fry have built golf courses all over the world, and Shelter Harbor is one of their very best. When you consider the combination of beautifully built holes, first-rate conditioning and a fantastic clubhouse with distant views of Block Island Sound from its viewing platform and cupola, it's not difficult to see why this club has attracted a connoisseur membership. 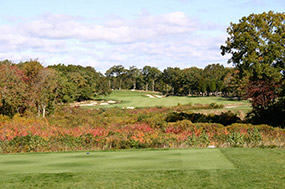 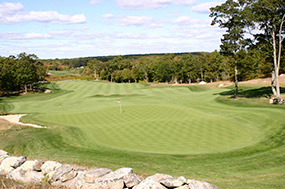 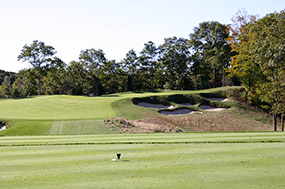 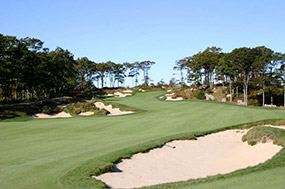