One of the most prestigious institutions of the American Northeast, the Sleepy Hollow Country Club in Westchester County was established in 1911 and its members originally golfed on an 18-hole template course created by C.B. Macdonald at the height of his extraordinary design career. Macdonald started work on this project shortly after the completion of his seminal National Golf Links on Long Island, and like at The National built features in the image of his favorite links holes in Europe.

The club itself was founded by a group of prominent businessmen, including William Rockefeller, and on an estate they had purchased from the daughter of William H. Vanderbilt. Blessed with elevated views across the Hudson River, the property featured a deep internal rocky ravine, a meandering creek and some natural wooded vales. It also had space for more golf, and toward the end of the 1920s the prolific A.W. Tillinghast was engaged to extend Sleepy Hollow to 27 holes. Tillinghast designed the 8th through 11th holes on the main course, and re-routed the 1st and 18th. He also altered several holes on the club’s impressive short layout.

Sadly, much of the Macdonald/Tillinghast work was disfigured and modernized over a number of years, as circular mounds, symmetrical pot bunkers and narrowed fairways replaced more stylishly created elements. Mercifully, during the early 2000s the club recognized that its potential had not been met and decided to engage Gil Hanse and Macdonald biographer George Bahto to not only restore the lost Macdonald features, but re-tweak the Tillinghast holes to be more in tune with Macdonald’s design philosophy. They were tasked, essentially, to establish a clear singular identity across the layout.

The improvements made to Sleepy Hollow since the restoration works began are as dramatic as at any course in the American northeast. Hanse and Bahto deserve great credit for being able to meld new ideas with old established design features, and for helping inject an authentic C.B. Macdonald flavor across the entire property. As one expects with a Macdonald course, at Sleepy Hollow there are Eden, Short and Redan par threes, the latter played to a green angled the reverse direction, as well as common copied features like punchbowl and double plateau greens, deep linear bunkers and even a central ‘Road’ bunker and Principal’s Nose complex. The beauty of the work done recently was that the newer holes are virtually indistinguishable from the originals, and indeed some of the holes within the Tillinghast valley at the far point of the property are among the most interesting on the course.

Of the Macdonald originals the par threes stand out, particularly the adjacent cross-ravine 3rd and 16th holes. The 3rd is an Eden template notable for its deep bunkering, benched green site and ghostly bridge crossing, while the 16th is an unforgettable short hole with a stunning Hudson River backdrop and iconic thumbprint contour. The preceding par four is equally memorable, for both the view you get of the 16th hole as you exit its punchbowl green site, as for the sheer joy of playing one of the great blind approach shots in American golf. From distance, the shot here needs to skirt around bunkers cut short and right of the putting surface.

Elsewhere, despite sloping ground the rising 2nd and falling 17th are great fun and crucial to the effectiveness of the routing as they connect the opening and closing areas to higher holes around the ravine. Approach shots into strong par fours at the 5th, 8th and 11th are also highlights, along with Tillinghast’s lakeside par three 10th and the elevated and steeply pitched 13th green. About the only area that disappoints is the nasty blind drive on the short par five 6th, an unfortunate by-product of needing to get from one elevation to another in as few shots as possible. The second half of the hole is terrific, and the fact it gets you to Macdonald’s reverse Redan 7th excuses the tee shot entirely.

While there are better known and more historic courses in Westchester County, post-restoration there are few with as much charm as Sleepy Hollow. Those who enjoy Macdonald’s work are bound to love this place, as are those tortured by the continual lengthening of our great Golden Age golf courses. It is perhaps an indictment on the direction golf has headed, that a hybrid like this feels more cohesive, and authentically olde–world, than some of its purebred, championship neighbors. 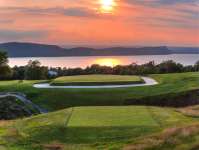 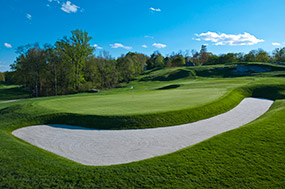 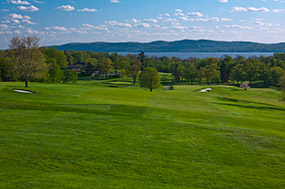