When Gil Hanse was awarded the contract to design the golf course for the Rio Olympic Games, it represented a changing of the guard and the ‘arrival’ of a new mainstream minimalist. No longer would Bill Coore and Tom Doak hog the architecture headlines, as Hanse’s increased profile would ensure that writers, raters, traditionalists and industry influencers all paid attention to his original design work. The sense of a big two becoming a big three was further heightened when news broke that Hanse and his partner Jim Wagner had been selected to build the third course at Florida’s Streamsong Resort. It was a masterful marketing move by the resort, and interest across the golf community was naturally high.

When Streamsong Black debuted in 2017 it provided the unique opportunity to directly compare Hanse’s work against his more established contemporaries. Wisely, Hanse made such comparisons at Streamsong difficult, by building something very different to the earlier works of Coore and Doak. Where the Red and Blue courses are intertwined and somewhat compact, the Black’s canvas is much more spacious and the overall scale of its sandy landscape far more impressive. As with the other courses, the design is linksy and ground-game dominant but the undulating areas tend to feature softer, elongated ridges, rather than abrupt pop-up dunes. The greens are also gigantic. Interestingly, their size is partly because of the way they were designed, and partly due to the abandoning of a curious construction decision to prepare surrounds as greens, and essentially integrate them together with painted dots as demarcation. Some targets are now in excess of 20,000 square feet, and with golfers putting rather than chipping have unfortunately lost a little of their transitional charm.

Regardless of any concern with the amalgamation of putting surface and surrounds, there is no denying that the majority of greens are attractively shaped and interesting to play toward. The hidden half-acre punchbowl at the 9th is a particular standout, given its lumps, bumps and distinct tiers. First-timers really need to trust their yardage, and their caddie, if hoping to get an approach shot close to the pin. Other feature holes are spread evenly across the opening eleven-hole loop and the final sandy seven, which are more irregularly undulating and notable for the twin-green 13th, the Sandbelt-esque par three 15th and an exciting par five closer that bends sharply around a small lake into the base of a scrubby dune.

Among roomier holes earlier in the round, our favorite is the mid-length 2nd, with both its ridgeline target and lower fairway angled across the golfer and bunkered to force non-bombers into a choice between a shorter, awkward pitch or a longer approach up the length of the green. The par five 4th similarly uses a transition into higher ground to pose strategic questions of the ambitious golfer. Also memorable are the elevated par three 5th and consecutive long holes at the 10th and 11th, the former an option–laden par five that can be tackled as aggressively or conservatively as the golfer chooses.

Although at times you can get a little lost in the landscape of Streamsong Black, the golf is engaging and the shaping every bit as sophisticated as on the resort’s earlier courses. Indeed, the great success of the design here is that Black rests so comfortably alongside the Red and the Blue, and is probably the preferred course for at least a third of Streamsong’s customers. Such popular acclaim should be of greatest satisfaction to Hanse, Wagner and their teams, even moreso than ranking recognition or commendation from the golf cognoscenti. 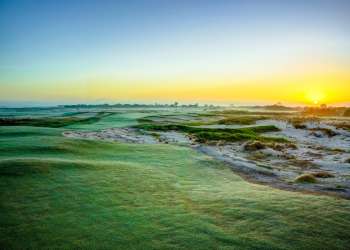 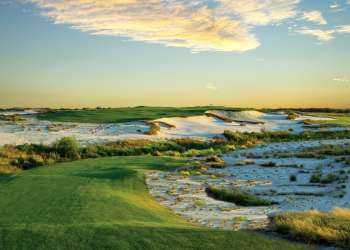