The Club at Black Rock

The Club at Black Rock is an estate course built close to Lake Coeur d'Alene in Idaho. It opened in 2003 and in 2009 became the first course in the state to be featured on Golf Digest's Top 100 list. Not only did the Jim Engh designed layout make the top 100, but it debuted in the Top 30 which is extraordinary given the competition.

What's surprising about the success of this course, is just how repetitive the design tactics employed by Engh are here. The course closely resembles The Sanctuary Course in Colorado and Tullymore in Michigan, with Engh continuing to employ his unsightly taco-shell bunkering, the traps built with broad grassy tongues that are used to disguise their very existence. As a result the bunkers lack definition from a distance, while up close they seem unnatural and fail to instill any fear in good golfers.

If only the problems ended here, for this is one of the nicer developers in the Coeur d'Alene area but either the routing is poor or the subdivision prevented sensible use of the best terrain for golf. The number of uphill shots into greens set at the base of an incline is ridiculous. Where Engh can't get his greens into the base of a hill he uses mounding instead, the shapes symmetrically created and built without any resemblance to nature. The result is that golfers can continually throw their balls beyond the green and bounce them back off slopes onto the putting surface. The internal putting contours then rarely fit the nature of the shot required, or the slope of the surrounding terrain. Often poor shots here are stopped by slopes rather than being fed into dangerous recovery positions, while conversely good shots are generally a 50/50 bet to end in a favorable position. The green shapes are also repetitive, most seem to have skinny sections or shallow wings, making it possible to set this course up to be really hard.

The Club at Black Rock has waterfalls and the occasional lake view and superb halfway house amenities, but this course is unwalkable and can't be recommended as there are no real quality holes, just some that aren't as bad as others. Its inclusion on the Golf Digest Top 100 list was a big surprise. 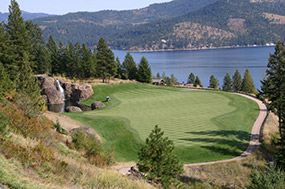 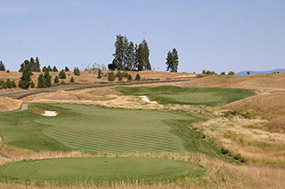 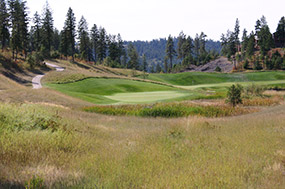