Dotted with lakes, marsh areas and a creek that trickles across the enormous site, the artistically shaped layout has some memorable holes but is most noted for its skinny greens and curious bunkering. Buried deeply into the ground, the bunkers here are mostly flat but lined by deep grassy fingers that jut in from the sides to obscure the view of sand. Although they look great in aerial photographs, at ground level they appear to be lush depressions and as a result fairways and greens tend to lack definition.

Another oddity are the heroic par threes, four demanding fearsome all-carry tee shots over hazards into severe targets. The most bizarre is the 12th, especially from the back tee where you need to drive more than 250 yards across a swamp to have any chance of reaching a hidden Dell green, which is set in a hollow and squeezed between two ridges. More noteworthy are holes like the 17th, with its concave target lined by deep traps, and the back nine par fives, which all sweep left but use hazards and narrow greens more effectively than some of the earlier holes. The reachable par four 3rd, for instance, has a tiny green that would tempt most to play an aggressive shot were it not for the tall oaks and large frontal bunker that force an awkward layback and conspire to destroy any semblance of strategy that may have existed.

With its eye-catching architecture, fine turf conditions and dazzling water carries, Tullymore is an appealing option for many golfers, and is certainly worthy of a side trip for those on their way through to Crystal Downs. 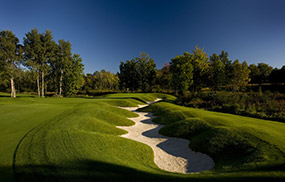