With the Ryder Cup coming to France for the first time later this year, the Global Golf Post are reporting on the contentious design back-story of the Cup’s famous venue.

Le Golf National outside of Paris has long been credited as a Hubert Chesneau design, with the now deceased golf architect Robert von Hagge listed as a mere consultant for the project. Von Hagge was initially given equal billing for the design but as years have passed the importance of the role he played in the development of the Albatros Course has slowly eroded.

Chesneau has a long association with the French Golf Federation, who developed and still own/operate the golf course, and in a letter to Global Golf Post addressing the controversy sought to clarify the role von Hagge played in the design of the course.

Following the decision by Executive Committee of the French Golf Federation in September 1985 to develop its own golf centre, the project which I had proposed was approved in May 1986 by the Committee (sic), and I was entrusted with the design and construction of the courses with the ability of seeking consultants of my choice.

We reached an agreement in February 1987 and I really appreciated Bob’s contributions and advice during the final elaboration of the course and his few construction site visits.

Alas, led by some of his collaborators, a controversy over the “paternity” of the drawing came to light until Bob and I decided (Sept 2008) to put an end to it and to remain on the original responsibilities of each one:

Unfortunately Bob is dead and can not confirm my words, but you will understand that I want things to be clear and accurate and that I am attentive to the respect of these facts.

The collaborators Chesneau references are Rick Baril and Michael Smelek, partners in a design business that still carries the von Hagge name. According to Baril and Smelek, von Hagge was responsible for much of the Le Golf National routing and sent design sketches to France that Chesneau used to guide much of the construction works.

Smelek told Global Golf Post the pair felt it necessary to go public with the dispute leading up to the Ryder Cup, in order for the facts to be known and to ensure “that we get our share of the credit, not just for Robert’s sake but for the company’s.”

Robert von Hagge's company apparently discounted its design fee to the French Golf Federation, in expectation that working on the home of golf in France would increase their profile in the country, and lead to additional work.

“Unfortunately,” says Smelek, “Chesneau has pretty much promoted himself as the designer all along.”

“If you look at the other courses von Hagge designed at the time, you can see that Golf National has his stamp all over it. It is highly unlikely that Chesneau could have come up with that design on his own. With the best will in the world, he did not have the background for it. You cannot suddenly produce a course of the calibre of Golf National.”

On Planet Golf we credit both Chesneau and von Hagge as co-designers of the Albatros course, having understood from some French insiders that von Hagge’s role did indeed include routing and design drawings.

The course is obviously celebrated in France, and will be the center of attention come the Ryder Cup later in the year, but isn’t exactly a masterpiece and in many ways hardly worth arguing about. Very few areas will excite the seasoned golf traveler. Those points aside, the article in the Global Golf Post will interest readers curious about the history of Le Golf National and perhaps how even the best-intentioned collaborations can unravel. 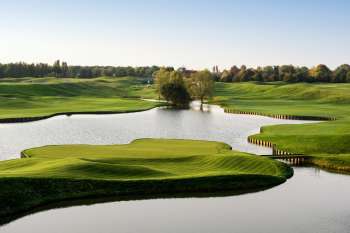