Positive news for public course golfers in Melbourne this week, with reports in the local Leader Newspaper that the Kingston Council has written to Australian Super to enquire about leasing their Dingley Village land for golf.

For those unfamiliar with the property, the former private Kingswood Golf Club was sold to Australian Super back in 2014 for a price of $90 million. An additional $25 million will be payable to the Peninsula Kingswood Country Golf Club, if the land can be rezoned and a housing development on the site approved prior to September 2022. The initial proposal put to Kingston Council for redevelopment, which included more than 750 home sites on the golf course, was met with overwhelming opposition from the local community. The rezoning application was rejected in 2018.

Here at Planet Golf, we have called for the former Kingswood Golf Course to be preserved for public golf and welcome news that the council has proactively contacted the land’s owner to investigate the possibility of reopening the site for golf.

While reopening Kingswood does seem a long shot, there is potential for a great public course there and the appetite of golfers in the area to play something that was once off limits would no doubt be considerable. While we understand that the bunkers and greens on the course are currently in a poor state, many of the fairways are being maintained and in good shape. With irrigation still available across the property, the greens could certainly be renewed and the bunkers returned to a playable condition over a relatively short period. Kingswood was always recognised for its conditioning, and there is no doubt the golf course could be playable, popular and viable once again should the owners be open to an operational lease.

When the Australian Super plan to rezone Kingswood for a residential development was rejected, some councillors suggested that the State Government should be lobbied to designate the property as “Green Wedge” land. Earlier this year, however, the Victorian Planning Minister released Planning Guidelines specifically for the “Conversion of Golf Course Land to Other Purposes”. It is widely anticipated in golfing circles, that the first development proposal the Minister will assess under these new guidelines is the redevelopment of the Kingswood land in Dingley Village. It would take a brave Minister to intervene against the wishes of more than 8,000 objectors. That is particularly true where a workable, sustainable alternative such as a public access golf course, is being actively pursued by the local council.

According to the Bayside News, one of the Kingston Councillors described Victoria’s new golf course Planning Guidelines as a “golf course land grab” that “allows people who have acquired golf courses to go over the heads of council.”

Although doubtful that the land owner will entertain the idea of leasing Kingswood back to the City of Kingston, full credit to them for at least trying. One hopes that Golf Australia can see the potential benefits here to our game as well, and support the Council in their efforts to save Kingswood and retain a good golf course in Dingley Village.

From the Bayside News:

KINGSTON councillors have expressed an interest in leasing the Kingswood site at Dingley Village to reopen the golf course.

The Dingley Village site was purchased by Australian Super in 2014 for $125 million. The original proposal for the land, to subdivide it and build nearly 800 residential dwellings, did not proceed after Kingston Council voted to abandon the planning scheme amendment for rezoning in late 2018. Golf is no longer played at the site, and its future remains unclear.

At their 24 August meeting, Kingston councillors voted to write to the owners of the golf course to “ascertain any interest in leasing the Kingswood land to the City of Kingston for the purpose of council establishing an 18 hole public golf course”.

After council receives a response from the owner, it is expected to prepare a detailed report to assess the viability of the proposal.

Cr Rosemary West said “this would be the best possible outcome to what’s been an unfortunate, badly handled, absolutely distressing, and heartbreaking process. Dingley Village residents are losing what they call the green heart of Dingley.”

“It’s very clear that the super fund that bought this was very badly advised,” she said. “It seems to me not far beyond belief that they might decide to take a loss, they might become a good landowner and a philanthropic land owner, and keep the course and lease it to council to run.

“Council of course leased the original Kingston public golf course near Moorabbin Airport. That was leased by council for many years, it was very successful, I think it made a couple of hundred thousand dollars a year.

“This would have to be one of the most magnificent 18 hole golf courses anywhere around. It’s practical, we have done it before, and we can do it again.”

Cr Tamara Barth, who moved the motion, praised the work of local community groups who have advocated for maintaining the golf course.

“The Dingley Village Community Association have been very active in this space continuously. There’s a number of lobby groups situated in Dingley with the view that they should get better community outcomes for that space,” she said.

“Part of their advocacy is reaching out to councillors asking for intervention to see if we can help and assist them turn that wonderful open space into something that can be enjoyed more by the community.”

Cr West said “the community of Dingley have run the most amazing campaign, the 8000 submissions we received in opposition to the development application was very telling.” 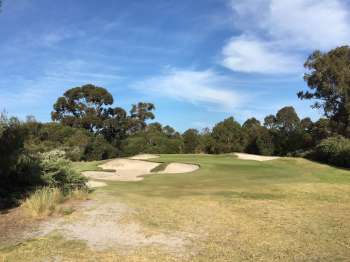