Construction began this month on an exciting new golf course in Tasmania, this time at Cape Wickham on the northern coast of King Island. The course is being designed by American golf architect Mike DeVries and will be built by Victorian golf course builders TURNPOINT.

The 18-hole layout at Cape Wickham will occupy an incredible seaside property in the shadows of Australia’s tallest lighthouse. Among other natural attributes, the site includes a north-facing beach known as Victoria Cove, a dramatic rocky headland called Cape Farewell and some of the tallest sand dune structures in golf. Sea views are constant throughout the round and the 150-foot Cape Wickham lighthouse dominates both the closing stretch of holes as well as the view from the clubhouse and lodge precinct.

Architect DeVries, who describes the site as the ‘best he’s seen, anywhere in the world’, has relocated his family to the small island to personally oversee construction of the golf holes. His routing includes 8 holes directly along the coast and another two that end with greens pressed back against the shoreline. Unusually for a coastal property like this, the inland holes are equally dramatic and blessed with the most interesting ground undulations on the property along with stunning views of Bass Strait and the Lighthouse.

Says DeVries of the property, ‘the combination of the Cape Farewell headland, Victoria Cove, Cape Wickham Lighthouse, views to ocean and shorelines, as well as the prospect of direct golfer interaction with the water makes this the most amazing site I have witnessed, existing or imagined.’ DeVries adds, ‘I’m very excited to be working in Australia and in particular on King Island. The opportunity is a great one because it’s a beautiful site and all the people associated with the project have been a pleasure to work with.’

Project consultant Darius Oliver believes that DeVries was an obvious choice to design the golf course, and is a perfect fit for the property. Says Oliver of the appointment, ‘we have one of the most passionate and talented course designers in the world here working on arguably the most spectacular piece of ground uncovered in Australia. It’s a site that demands total commitment and a hands-on approach to design and construction. Mike’s preparedness to personally shape greens and bunkers was a major factor in his appointment, as was his proven ability to work creatively and efficiently in sand. Our aim is to put King Island on the golfing map, and we are confident that Mike can help us deliver, for the islanders, a genuine world-class course.’

King Island is located in Bass Strait, midway between Melbourne and the northwest coast of Tasmania. The island is best known for its world-class dairy products, fresh seafood and succulent grass fed beef. It’s also a surfer’s paradise, with perfect year-round conditions and one break, at Martha Lavinia beach, ranked among the finest in the world. For golfers too, the existing King Island Golf & Bowling Club in Currie is regularly listed among Australia’s best 9-hole courses.

Access onto the island is by plane, from either Tullamarine or Moorabbin airports in Melbourne, or from Launceston and Burnie airports in Tasmania.

Besides enjoying outstanding golf facilities and learning about the lighthouse, visitors to the resort at Cape Wickham will be able to experience the historic shipwreck trail, which takes in much of the northern coastline. It was here at Cape Wickham in the 1830s that the convict ship Neva sank, resulting in the deaths of more than 200 women and children. Further south in 1845 the Cataraquialso crashed into the King island coastline, with more than 400 people perishing. The sinking of the Cataraqui remains Australia’s worst maritime disaster and led to the construction of the Cape Wickham and Currie lighthouses.

Cape Wickham is also home to a sizeable colony of short-tailed Shearwaters (commonly known as mutton-birds). These migratory seabirds spend winters in the Arctic and return to King Island over summer to breed. The golf course will be constructed around their breeding seasons. Much like the Penguins on Phillip Island, the birds are a genuine attraction of the region and each night resort guests will be able to enjoy the spectacle of thousands of seabirds returning to their burrows after dark.

Construction of the golf course at Cape Wickham is expected to be completed sometime in 2014.

Media Contact - For images or additional information about the project please contact Darius Oliver on (+61) 417 568 101 or at darius@planetgolf.com.au

Mike DeVries is a Michigan based golf course architect, best known as the designer of The Kingsley Club and Greywalls golf courses in his home state. DeVries has also been involved in the restoration of a number of old golden age courses, including the Meadow Club in California and the University of Michigan course in Ann Arbor, both originally designed by Dr. Alister MacKenzie. He has also worked on the St. Charles Country Club in Canada, home to the only Alister MacKenzie holes in that country, and has recently been appointed to oversee course changes at another MacKenzie classic, the Jockey Club in Argentina.

DeVries’ passion for design and his links to the great Dr. MacKenzie stretch back more than 35 years, to his junior days at the legendary Crystal Downs course in Michigan. A long-time member of the club, DeVries worked in the pro shop as a child and spent several summers on the grounds crew prior to obtaining his Masters degree in Landscape Architecture and forging a career in course design.

DeVries is no stranger to Australian golf, having studied the leading MacKenzie courses in the southeastern states whilst working as chief architect for the “Lost MacKenzie” project, El Boquerón, in Texas. DeVries’ adherence to the design principles of Dr. MacKenzie, and his passion for the best of Australian golf, together with a hands-on approach to design and a stellar record transforming good ground into great golf, made him the logical candidate for the project at Cape Wickham.

Established in 2002, Victorian golf course builders TURNPOINT Group have been responsible for the construction of a number of renowned golf courses across Australia, Asia and the Middle East. CEO Andrew Purchase first identified Cape Wickham as the ideal location to build a new links on King Island, and has worked closely with local council and the Tasmanian state government throughout the regulatory process.

Beyond golf course construction, the company is also a leading provider of maintenance services to both the golf and horse racing industries. More information available at www.turnpoint.com.au 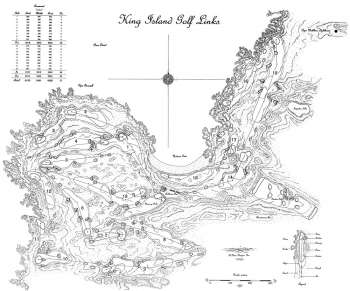 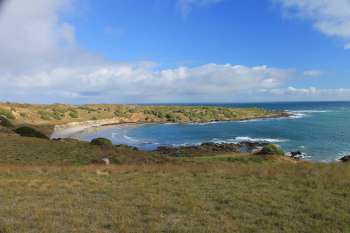 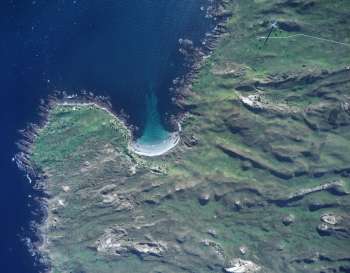 Aerial view of the site at Cape Wickham King Island