The driving force behind the Castle Stuart development in northern Scotland was American entrepreneur-investor Mark Parsinen, who also helped create Kingsbarns further to the south. The success of Kingsbarns had emboldened Parsinen, and encouraged him to look across Scotland for a second coastal site upon which to build a modern links. Shortly after discovering what became the Castle Stuart property near Inverness on the Moray Firth, he sold his stake in Kingsbarns and moved his efforts and energies onto the new project.

As with Kingsbarns, Castle Stuart was a difficult site but an almost instant hit thanks to its very appealing Highlands scenery, constant sea views and old-school understated design. That design was created by Gil Hanse in association with Parsinen, the pair working closely to shape a series of attractive linkslike holes across a property only partly set down by the water’s edge.

The most critical decision made by Hanse and Parsinen during design relates to the routing, and the starting of each nine with three holes along the Firth. This was done to spread the water holes across the layout, and ensure it played on both the left and right during the round. The unfortunate byproduct of this loose figure eight arrangement is the elevation change from the lower section up to the higher bluff, particularly on the back nine. The energy-sapping climb from the 12th green to the 13th tee is by far the biggest routing drawback at Castle Stuart. On the positive side, once you scale the bluff the elevated holes are mostly excellent and the views across the lower section and over the inlet are superb.

With its focus unashamedly on fun and playability, Castle Stuart is a joy and full of excellent holes and terrific design features. Early standouts include the opening three-hole stretch along the shoreline and the short inland 4th, which plays directly toward the 17th century Castle for which the golf course is named. The other par threes are also outstanding, particularly the long 8th with its creatively contoured green area pushed back against a gorse-covered dune and the gorgeous shorter 11th with its Firth backdrop and rugged bunkering.

Among the interesting longer holes are the undulating 9th, the dramatic par five 18th and doglegging par fours at the 13th and 16th. Bunkering around such holes is generally kept to the sides of the greens, with ground undulations preferred as a means of testing the approaching golfer. The bumps short right of the 7th green and in front of the 13th are especially effective, and well incorporated into the playing strategy of each hole.

About the only criticism of this course, and it is a minor one, is that all too frequently the middle of the fairway is the best place to be, and rarely is sand the major challenge when out of position. Apart from the wonderfully strategic short par four 3rd, there are actually few holes here with any serious internal bunkering. The absence of the nervy flick over sand will certainly please some, but perhaps leave elite golfers questioning whether these links are too straightforward.

We would always urge developers to err on the side of playability over difficulty, and admire Castle Stuart for focusing on fun and for the varied manner in which ground contours challenge from both the fairway and around the greens. Although the bunkering might be more fearsome elsewhere, there are few links in this part of the world with as appealing a mix of sand styles. Some of the traps have traditional, revetted faces while others are built with shaggy fescue edges or a combination of the two.

The green sites are also attractive and original in their arrangement. Few feel alike, and most play differently according to wind and pin position. Pleasingly, like all the great old courses the internal putting shapes blend nicely with the surrounds and appear a mere extension of the apparently natural ground leading into the greens.

Rather than beat you up with relentless difficulty, Castle Stuart charms with its wonderful sea views, its routing intimacy and delightful links design. As with Kingsbarns, Parsinen deserves a great deal of credit for this development and for ensuring that his modern links retained a sense of traditional character. The course has proven a wonderful addition to the golf offerings available in the Scottish Highlands. The fact it is even spoken of in the same breath as the nearby links at Brora and Royal Dornoch is testament to its quality. 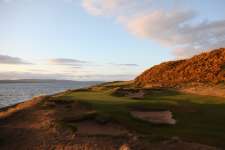 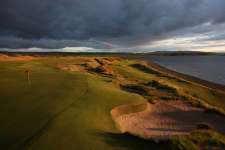